Wild Tales is an Argentine-Spanish black comedy drama about five and a half stories that are connected to each other in that each story is a about people doing whatever they  want without restraining themselves. The subjects of the stories range from a story about a man kidnapping a plane full of everyone who was cruel to him to a story about a women poisoning the man who caused her father's suicide with plenty of deaths, failed marriages and people crapping on cars in between.

I like the general idea of people doing whatever they want without restraining themselves (just like animals) as I think it is smart and pretty original but this movie didn't treat this idea to it's full potential. Sometimes this movie shows situations that are too vulgar and childish to seem real instead of showing situations that seem more realistic. Some of the motives of the characters seemed idiotic too. The actors are mostly unknown and not very convincing in their roles except for Ricardo Darvin who is very good as an average man who is fed up with the way the dmv treats the regular citizen. I liked the theme of inside/outside while the people that drive the situation are inside and the people that are driven by the situation are outside. I liked the motifs, one of them being a fire extinguisher that symbolizes rage at its purest and something that is going to explode (metaphorically of course) and another one being a cake to symbolize a hope for the future and a happy ending. As a comedy I find this movie is pure rubbish as it has very few good laughs, a horrible sense of humor and lets you leave the theatre with a very dark feeling. On the other hand, as a drama this film is interesting as it has a philosophical elements in it that show the beast that is hidden in all humans.
Verdict: 3/5


In one sentence: "an interesting  and original film with some idiotic scenes and mediocre acting" 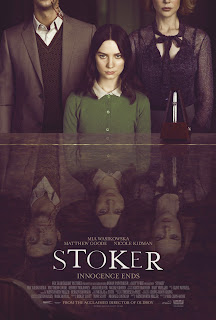 After the death of her father India Stoker is left to live with her unstable mother Evelyn until her uncle Charlie comes to town and starts living with them. India and her mom are both attracted and intrigued by Charlie's calm and quite manner. But India and Evelyn don't know that Charlie holds a horrible secret with him. When Charlie first arrives, India feels like he is replacing her father and starts worrying, she later on accepts that when she realizes that Charlie murdered her father and she starts to become attracted to Charlie and his brutal murders. What happens after that is beyond imagination. I loved the way director Park Chan Wook uses synthetic editing to show similarities and memories of past and present. Park Chan Wook has a very unique and fast passed editing style which is a little bit like Quentin Tarantino's (Tarantino is a big fan of Park Chan Wook). Nicole Kidman is good as Evelyn an unstable mother and widow who found a 'better' version of her dead husband in his younger and charming brother Charlie, Mia Waskiwoska is pretty good as a straight A student that is going through a shock after the death of her father and discovers many new sides to herself, the problem about the acting is that many of the minor actors weren't very convincing in their roles. The film's story is very interesting with a couple of twists and turns, but I thought the script was going too fast because I felt like the changes in the interaction between Charlie and India were too fast. The whole movie was short but the fast passed editing worked but the script felt unreal. This movie is very unique in its sinister way, in spite of the flaws I liked it a lot especially because of the directing.
Verdict: "4/5"
In one sentence: "a unique and fast passed film with some flaws."

Pulp Fiction is a crime drama film. It is about the tales of two hitman, a mob boss' wife, a boxer, and two bandits which all intersect. I liked the way all the stories intersected without feeling forced. I liked the acting especially Samuel L.Jackson who gave a dazzling and very emotional performance Uma Thurman was very good too as a smart and funny in your face mob boss' wife. The dialogue is witty, in your face, and very "cool" with a lot of references to pop culture. The story is very good and brilliantly told in a nonlinear order. I liked the the Tarantino trademarks which are hidden all around this film and it is very fun to point them out (Mexican stand offs, red apple cigarettes, feet, garage pov (point of view) shots, etc...). The characters are interesting, I liked butch's (Bruce Willis) backstory. Almost all of the characters get developed. This movie manages to be smart and challenging and at the same time fast paced and "cool". I liked the Tarantinto style black humor which is always combined with violence making it pretty shocking too. I liked the soundtrack which is all "borrowed." I liked  the unusual editing too, many scenes start without any establish shot, breaking of the 30 degrees rule and so on. There is just nothing bad to say about this film.
score: 5/5
in one centence: "a great tarantino film!!'
פורסם על ידי נדב1234 ב- 3:49 אין תגובות:

Kill Bill Vol.1 is about the bride (Uma Thurman) a former member of  the deadly viper assasination sqaud who quit the squad for a simple life with her fiancee in Texas. She was bruatlly attacked in an attempted murder along with 8 other people who were all killed (including her fiancee) at her wedding by the other members of the sqaud. She now seeks revenge on all of  them. After she kills them she can finally kill Bill who is the head of the squad. The  film opens with a powerful short scene where the bride is seen shot in the head by Bill. From there it jumps in time to the last chronological scene in the film and from there to the almost beginning with some more flashbacks along the way. This film is a homage to the low budget gory martial arts films that Tarantino used to watch as a clerk in a video store. As expected it is very gory but the violence looks very fake. Don't get me wrong, the violence is exaggerated intentionally, I found it unique and interesting although some might disagree. The story wasn't very uniqe, but again this is a homage. Some people might say Tarantino takes the homage thing too far, I on the other hand found it interesting. Although the story is chewed out Tarantino did add a lot to the genre. The Tarantino style editing which is very stylized and so many Tarantino trademarks (feet, red apple cigarettes, corpse and trunk pov (point of view)etc...), I especially loved the black humor.  The acting was pretty good but this movie is pretty shallow on emotions and acting (the exact opposite of Kill Bill Vol.2). Again, don't get me wrong it is all intentional. The cinematography is amazing, very aesthetic and unusual angles and frame sizes (lots of close ups and extreme close ups). I liked the symetrical frames like in a lot of martial arts (especially Japanese) films. I liked the use of snow and cherry trees for aesthetics (again like in Japanese films), and the very strong use of colors too.
Rating- 5/5 stars.
In one scentence- "A very unique and stylized film".
פורסם על ידי נדב1234 ב- 6:34 אין תגובות:

Prisoners﻿ is about two families (Dover and Birch) who are friends. When the two families have Thanksgiving dinner together at the Birch family's house, the small daughters (Joy Birch and Anne Dover)  go to Anne's house to look for Anne's red whistle. The problem is that they do not come back. After some time, the police start to investigate the case. Soon after that the police find a suspect for the girl's kidnaping, the suspects name is Alex Jones. Alex lives with his aunt Holly who adopted him after his parents died in a car crash. The police soon release Alex because he has an IQ of a 10 year old. Keller (Anne's father) is sure that Alex is the killer. After Alex gets released Keller kidnaps him because he is sure that Alex knows where Anne is. From there the movie is full of twists and turns. The photography is very good but the photography and the twists can't make up for the bad dialogue. The dialogue is really bad, some of it is to flat  and some of it boring. The script writer probably thought that you will automatically empathize with the characters because their daughters/sisters got kidnapped but I couldn't empathize with hardly any of the characters because you can hardly get to know them, Keller is supposed to be some kind of anti-hero but it just doesn't work.
in one sentence: "Great twists and poor dialogue make an ok movie"
verdict:3/5
פורסם על ידי נדב1234 ב- 6:45 אין תגובות: